Somerset Development has hired a creative director to help it implement the transformation of the 2 million-square-foot former Bell Labs building into the mixed-use hub known as Bell Works. 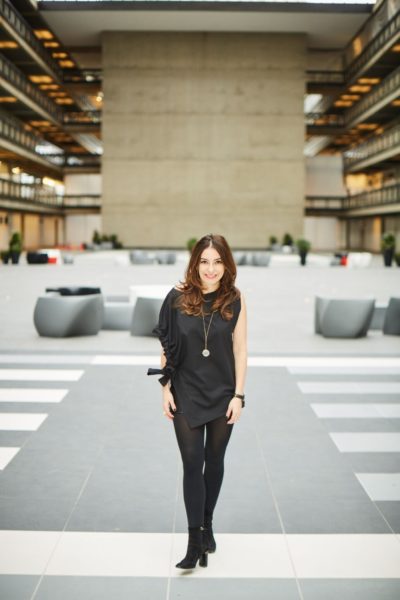 In a news release, the firm said it hired New York-based interior designer Paola Zamudio for the post. Zamudio, founder of NPZ Studio + Décor, will be responsible for “cultivating the unique Bell Works experience” as the former research facility is reborn as a self-contained urban environment in the suburbs.

This means “implementing the look, feel and energy of Bell Works through design and cohesive branding” when it comes to areas such as office and common space, event themes, graphics and signage.

“Bell Works is once again teeming with life, with hundreds of workers and visitors passing through its doors every day,” Ralph Zucker, president of Somerset Development, said in a prepared statement. “Now, it’s up to us to ensure that we’re continually fostering and improving upon the building’s unique environment and aesthetic.

“We’re thrilled to have Paola’s creative mind and impeccable taste guiding Bell Works’ designs and event themes, and we’re sure our tenants will share in that sentiment.”

Zamudio, a native of Colombia, has already served as lead designer for the building’s revamped public area and dining area, the Big Bang Café. The news release said she has incorporated design pieces from Moroso and Hellar, Frank Gehry and Massimo Vignelli throughout the space.

“As a designer, it’s truly a privilege to play such an important role in reviving one of Eero Saarinen’s masterpieces,” Zamudio said. “Now, Somerset’s vision to create a metroburb here in Holmdel is quickly coming to fruition, and it provides a creative canvass that is truly one-of-a-kind.”

Zamudio has completed fine arts and design programs at Barry University, Fashion Institute of Technology and The New School, while earning a master’s degree in design trend forecasting from Polimoda in Florence, Italy, the news release said. Throughout her career, she has worked with industry leaders from Elle Magazine, Lucky Magazine and New York Fashion Week.

The hiring comes as Bell Works fills out its office space, following a flurry of leasing signings including one with anchor tenant iCIMS, a software company that is slated to occupy more than 300,000 square feet. The property’s leasing team is also focused on Bell Works’ retail platform to help deliver the full urban experience in suburban Holmdel.