Demolition is underway for the first phase of project to redevelop a series of vacant, blighted retail properties on Route 18 in East Brunswick. The initial phase would include apartments and medical, commercial, retail and restaurant space, as depicted in this rendering. — Courtesy: Russo Development/River Development Equities

A development team has started demolition of a blighted, long-vacant retail complex along Route 18 in East Brunswick, in a critical step in a plan to build new apartments, commercial space and other uses as part of a destination spanning dozens of acres.

The project, a joint venture of River Development Equities LLC and Russo Development, is several years in the making and is moving forward after receiving site plan approval last month. Plans call for transforming a redevelopment zone west of Route 18, roughly between Ruth and Lake streets, made up of mostly shuttered or underused structures that were once part of a thriving highway retail corridor.

Demolition is now underway for the project’s first phase, which would include two buildings, the first of which would have 306 apartments and some 40,000 square feet of medical, commercial, retail and restaurant space, River Development said. The structures would repurpose a nearly 14-acre portion of the site north of Lake Avenue and east of Renee Road, currently home to roughly 200,000 square feet of defunct retail space including former locations for Gap and The Wiz.

“If you look around at a lot of the commercial spaces, they’ve been vacant for the last 20 years,” East Brunswick Mayor Brad Cohen said Tuesday. “We have to adapt, and part of that is just the cold realization that we are moving to a different type of economy.”

Speaking during an event at the township’s municipal complex, Cohen noted that younger residents that left the suburbs years ago are now returning to raise their families, “so we need to be able to ride that curve and to take advantage of an opportunity that doesn’t come that many times in a lifetime. And that’s exactly what we have done.”

The project is advancing after litigation tied to the township’s ability to use condemnation as part of its plan to repurpose the site, which several property owners in the 88-acre redevelopment zone opposed. A state Superior Court judge ruled in the township’s favor earlier this year, clearing the way for River Development and Russo to purchase and assemble parcels for phase one.

Warren Waters, a principal and partner of River Development, said the start of construction is still pending additional county and state permits. But the demolition is a clear milestone for a plan that was unveiled in February 2020, a month before the start of the COVID-19 outbreak, creating a setback but also a chance to refine the project design.

Another milestone, he said, was partnering with Russo Development, one of New Jersey’s most prolific multifamily builders.

Ed Russo, the CEO of the Carlstadt-based firm, added: “Our collaboration with East Brunswick will result in an exciting new mixed-use destination that will add new luxury apartments and lifestyle retail along the Route 18 corridor.” 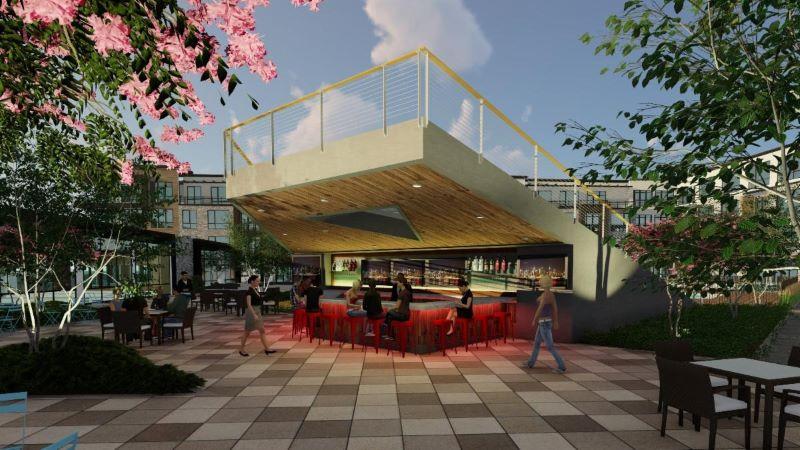 A version of the plan detailed in 2020 also included segments with additional residential, commercial and hotel components, along with a mass transit hub and a network of trails and park space. Township officials on Tuesday kept their focus on phase one, highlighting the pace of progress since the favorable court ruling around eight months ago.

Mike Hughes, the executive director of East Brunswick’s redevelopment agency, said that progress has included due diligence, site acquisition, engineering and review and approval by the township planning board less than three weeks ago.

“There really is a commitment not only from the township to work to eliminate red tape, but there is a clear effort on the part of the redeveloper as well to move quickly to get to this point,” Hughes said, adding that the proposal has bipartisan support.

Councilman James Wendell, who also chairs the redevelopment agency, heaped praise on both developers involved in the project. When the township issued a request for proposals for the target area in 2018, Waters “was the one that brought in the most exciting plan, the most comprehensive plan, the plan that gave amenities back to the town.”

“They’re building all over the state and they build to hold,” Wendell said. “They’re going to be partners with us for a long time and we’re so happy to have a build-to-hold developer that’s going to be here in East Brunswick, because they’re going to want it to be opening day every day.”

“This event represents a milestone in East Brunswick’s transformation of the Route 18 corridor into a vibrant mixed use town center that captures the retail opportunities for both local residents and commuters that travel through here every day,” said Fran Reiner, director of planning and redevelopment and a partner at DMR Architects. “It is rewarding to see the vision that we helped the township create move closer to becoming East Brunswick’s first walkable town center.”