Office buildings within the state’s transit hub market continue to command higher rents compared to their suburban peers, according to JLL’s annual research report. Proximity to mass transportation within walking distance of amenity-rich areas has expanded the millennial demographic across these markets. The resulting demand for high-end Class A office space—that helps companies attract and retain the talent settling into these neighborhoods—drives rent premiums beyond that achieved in suburban markets.

While the transit hub vacancy rate increased to 19.2 percent at year-end 2016, it remained approximately seven percentage points less than the vacancy rate reported in the state’s suburban office market. The higher transit hub vacancy rate was attributed to consolidations that outpaced demand within the 18.3 million-square-foot Hoboken/Jersey City market. However, these additional vacancies coupled with available economic incentives are expected to create opportunities for companies pursuing competitively-priced Class A space options in close proximity to Manhattan.

The highest transit hub market rental rate of nearly $47.75 per square foot is reported in Summit, where the vacancy rate of 3.2 percent is at its lowest point in the last six years. The office inventory in Summit consists of six buildings totaling less than 400,000 square feet of rentable space. It represents the smallest transit hub market in the state and is particularly susceptible to fluctuating vacancy rates. 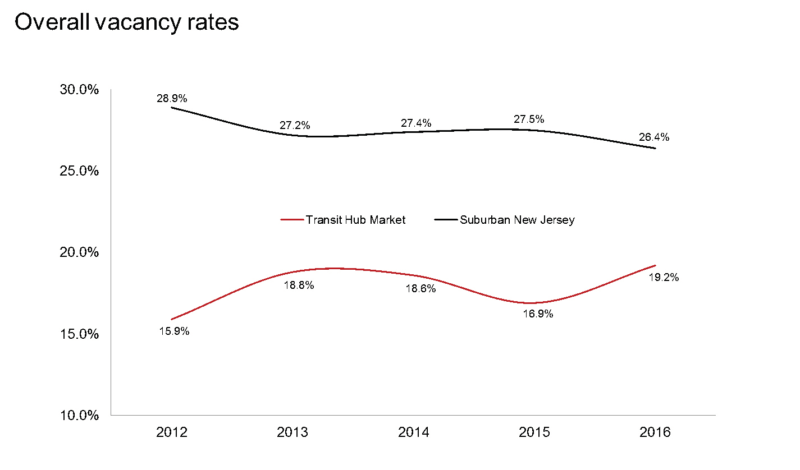 The long-term outlook for both transit and suburban markets remains positive despite the pockets of rising vacancy rates during the past year. Overall, solid rent growth is expected for high-end and renovated Class A space, as it remains the product of choice for office tenants. In the transit hub market specifically, an empty speculative construction pipeline, met by strong demand for space, will apply additional upward pressures on rents. 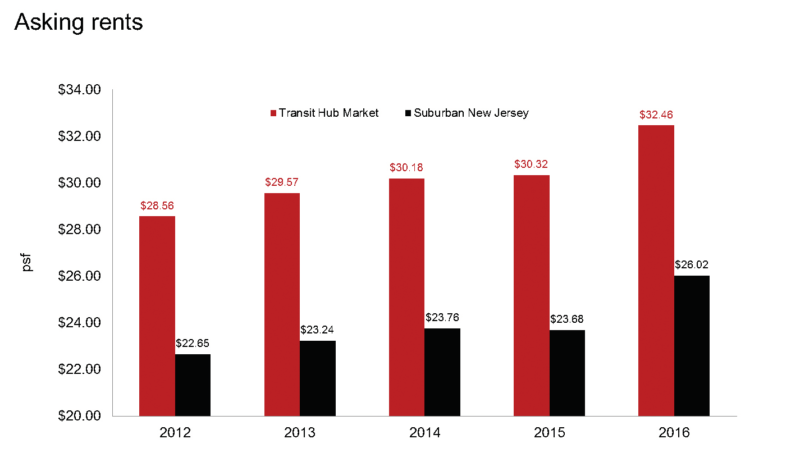