Ed Guiltinan is nearly six months into his return to New Jersey and to Mack-Cali Realty Corp., following two decades as a leasing executive in Manhattan with Rockefeller Group.

As he points out, his ties to New York City remain all too important. Guiltinan, Mack-Cali’s senior vice president for leasing, notes that the company is keenly focused on tenants from across the Hudson River as it looks to lease up its flagship Harborside complex in Jersey City.

“The vast majority of tenants that are going to come to our project are going to be New York-based tenants leaving Manhattan and coming to New Jersey,” Guiltinan said. “So we think it’s critically important to have good relationships and proactively pursue tenants and brokers in the New York market.

“We’re not forgetting about brokers and tenants in New Jersey,” he added. “But a critical part of the work I’m doing is targeting tenants in New York, using my relationships with brokers in New York that I’ve gotten to know over the last 20 years and promoting the great assets that we have out here to make sure that tenants in New York are fully aware … of the improvements that we’ve been making.”

That focus is now coming into play, with a new year underway and as Mack-Cali looks ahead to the completion of the sweeping, multiyear transformation of the 4.3 million-square-foot Harborside campus. The company expects to unveil those changes in the coming months and will have much to show tenants that are in the market. That includes a reimagined Harborside 1, a prominent 400,000-square-foot building at Hudson Street and Christopher Columbus Drive, which Mack-Cali has reskinned as part of a top-to-bottom overhaul.

With those new offerings on the horizon, the real estate investment trust is also looking to be more assertive as it engages both existing and prospective tenants.

“I think before we took more of a wait-and-see approach and let the brokers call us,” said Ricardo Cardoso, Mack-Cali’s executive vice president and chief investment officer. “We were more responsive than proactive and I think that is a complete change in the marketplace.”

Guiltinan is leading that effort in tandem with Robert Willis, senior vice president of construction, who also joined Mack-Cali last fall as part of the company’s new leadership. MaryAnne Gilmartin, who took over as board chair and interim CEO last summer before stepping down this week, announced the hires alongside a new leasing agency team led by CBRE’s Mark Ravesloot, with Mary Ann Tighe set to consult on the project and a roster that also includes Peter Turchin, Jeffrey Babikian, Robert Norton and Brett Shannon.

As Cardoso notes, the brokerage team will be responsible for the company’s entire office portfolio in Jersey City. That alone represents a key change from the past, when the REIT had something of a disjointed approach with different brokers for different buildings along the waterfront.

“I think that sends the right message and delivers the same message across the portfolio,” said Cardoso, who joined the Robert Martin Co., a predecessor of Mack-Cali, in 1994.

Guiltinan, who was with Mack-Cali from 1997 to 2000, said he has “spent a lot of time learning about the assets and just trying to rebuild some relationships with existing tenants, prospective tenants and brokers.” Interest along the waterfront has come from multiple industries and for spaces ranging from 2,000 to more than 100,000 square feet, he said, providing reasons for optimism even with the pandemic still looming.

“It’s a challenging market right now with COVID in terms of our activity levels,” he said. “You always want more, but I’ve been pleasantly surprised or encouraged that we have had a fair amount of activity.”

His focus on Harborside is no surprise, given the REIT’s move to shed its once-vast suburban office portfolio and be laser-focused on Jersey City. Since 2016, Mack-Cali has gone from owning 249 office properties with a combined 30 million square feet to what is now just 25 buildings comprising 8.3 million square feet, Cardoso said. When the company is done with its disposition program, its commercial portfolio will consist of just 5 million square feet across six buildings, all within the Hudson waterfront.

“The transformation of the company is pretty drastic,” Cardoso said, while also highlighting how it has reshaped its multifamily platform. The company now has 7,800 residential units in operation or under construction across 30 properties, an increase of roughly 1,000 units and eight assets from five years ago, and the capacity to build another 7,600 units.

What’s more, it started 2016 with just a 48 percent interest in its multifamily portfolio as a result of subordinated interest and joint venture partnerships. It has since grown that position to 85 percent, thanks in part to the proceeds from selling its commercial buildings.

With its office business now squarely focused on Jersey City, Mack-Cali is entering the final stretch of a project that goes back several years. Aside from reskinning and upgrading Harborside 1, Mack-Cali has also renovated and added new dining options to the sprawling atrium between Harborside 2 and 3, among other upgrades. 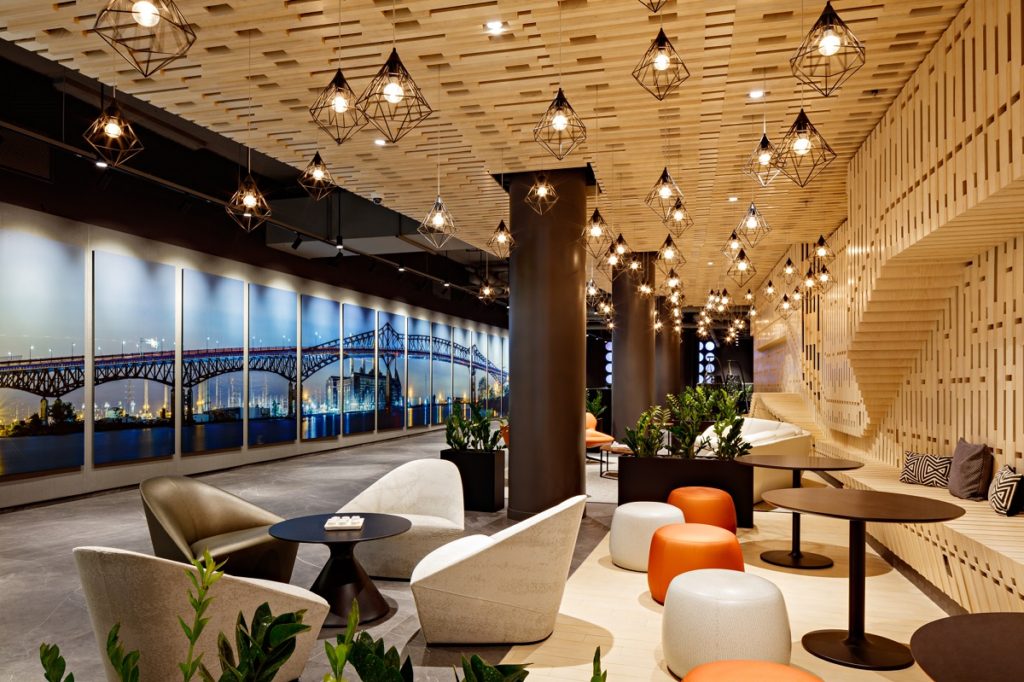 The REIT is also tending to the infrastructure of each building. That is especially key at Harborside 1, Guiltinan said, where it aims to “create a building that’s not just good to look at, but is functionally state-of-the-art.”

The veteran leasing executive said he is optimistic after his experience at Rockefeller Group, which completed a similar overhaul of the 2.1 million-square-foot former Time & Life Building at 1271 Avenue of the Americas in Midtown Manhattan.

“I’m excited that I know what happened at 1271 and I’m confident we’re going to see similar results here,” he said.

It won’t hurt that Mack-Cali will have a retooled state incentive program at its disposal. In early January, Gov. Phil Murphy enacted legislation that will create a new tax credit to encourage economic development, job attraction and the retention of significant numbers of jobs in danger of leaving the state.

Known as the Emerge program, the subsidy will serve as a successor to the Grow New Jersey incentive, which fueled major office deals along the Hudson waterfront prior to its expiration in 2019.

“It’s critically important for us,” Guiltinan said. “It just levels the playing field for us with New York and improves our position. … Certainly, since I’ve been here, tenants have been anxious to know what incentives were available for them and if and when other incentives would be available, so it’s a big win to get that in place.”