The New Jersey Performing Arts Center and its development partners have detailed a $150 million expansion of the venue’s campus in downtown Newark, with plans calling for 350 apartments, a food hall and a new family arts and education center around the existing building. — Courtesy: NJPAC

A long-awaited plan to expand the New Jersey Performing Arts Center campus in Newark — with new residential, commercial and cultural space — is slated to break ground next year.

The venue operator on Monday detailed its plans and its development team for the $150 million project, which calls for building roughly 350 apartments, a food hall and a new family arts and education center around the existing building. NJPAC is proceeding with the project alongside L+M Development Partners, the firm behind several high-profile developments in the city, and a team that also includes Prudential Impact & Responsible Investments.

Architectural firm Skidmore, Owings & Merrill is spearheading the design of the new district, which is slated for a site just west of McCarter Highway between Center and Rector streets, on a portion of NJPAC’s 7.3 acres of developable land.

“Contributing to the ongoing revitalization of Newark’s downtown has always been central to the arts center’s mission as the city’s anchor cultural institution,” said John Schreiber, the center’s CEO and president. “This plan is a thoughtful, curated mix of residential buildings, retail environments and cultural resources. We want this new neighborhood to be an exciting place to live, as well as a uniquely engaging destination.”

Located in the northern end of downtown Newark, NJPAC has helped anchor and draw visitors to the city since its opening in 1997. Supporters have long dreamed of expanding its footprint and creating a vibrant arts district around the venue, but those plans have been slow to materialize beyond a 22-story, 245-unit residential tower that opened across the street in 2018. 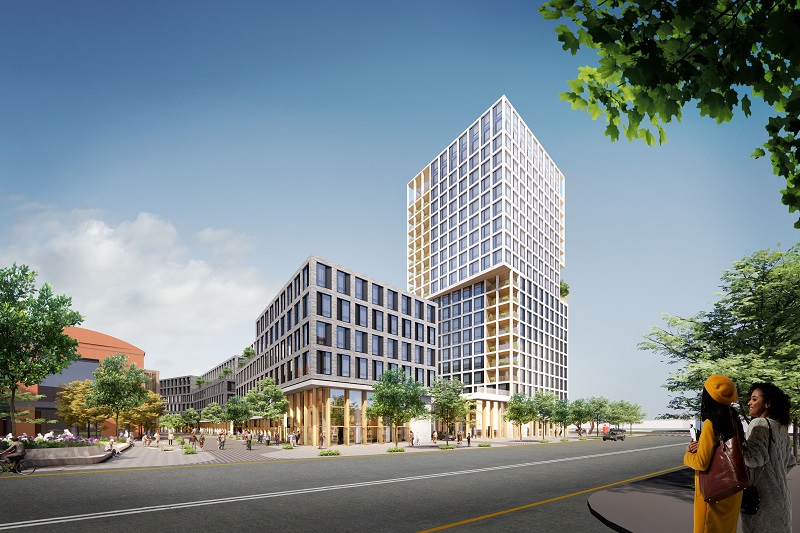 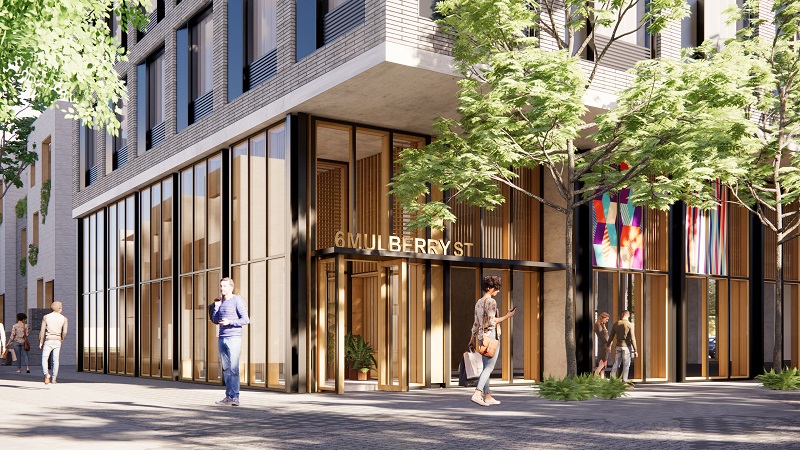 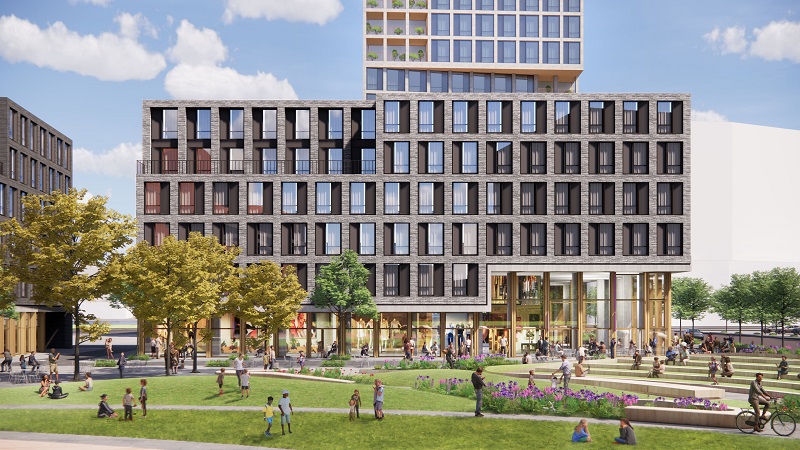 NJPAC is not financing any of the vertical development within the newly unveiled expansion plan, but is providing the guiding vision for the district and a ground lease for the project. The venue and Center Street Owners, the partnership entity led by L+M, will seek financial support from the city of Newark and the state Economic Development Authority.

“We are proud to unveil the transformative plan for the arts center in collaboration with NJPAC, which will not only help to lift up the arts community in Newark, but also deliver much-needed mixed-income housing and opportunities for local businesses, retailers and beloved New Jersey restaurants,” said Ron Moelis, CEO and co-founder of L+M Development Partners. “This project is part of our longstanding investment in the revitalization of Newark and together with our public and private partners, we aim to continue addressing the critical needs of the city.”

The new district, slated for completion in 2024, will include a pedestrian-friendly extension of Mulberry Street across what is now an NJPAC parking lot, connecting to Rector Street to the north. The project team will simultaneously redesign NJPAC’s eastern facade to create a welcoming additional entryway to the facility.

The center has also tapped acclaimed restaurateur and celebrity chef Marcus Samuelsson as a partner, noting that he will spearhead the food hall known as Mulberry Market. The building will be similar to Boston’s Faneuil Hall and Philadelphia’s Reading Terminal Market, but on a smaller scale, serving as the centerpiece of the new neighborhood and featuring additional uses such as a teaching kitchen that provides community cooking classes.

For its part, L+M’s involvement follows its successful restoration and redevelopment of city landmarks such as the former Hahne & Co. department store and the former New Jersey Bell tower, which are both now vibrant mixed-use destinations in the downtown. The former is home to Samuelsson’s first restaurant in Newark, Marcus B&P, which opened in late 2017.

“This thoughtful expansion of NJPAC’s arts and education district will further enliven the streets of Newark, with an array of offerings to engage residents and visitors alike,” said Lata Reddy, senior vice president of Prudential Inclusive Solutions. “The arts and NJPAC are already a critical driver of growth, and these exciting additions will further our shared goal of making Newark a destination city.”

NJPAC noted that, with early conceptual inspiration and financial support from Prudential Impact & Responsible Investments, it began to craft a master plan for the redevelopment in 2019. It did so with the help of the agency known as RePlace Urban Studio, which helped steer the center to an open, welcoming public space where the arts are activated and experienced both indoors and out.

“This is a purpose-designed community that reintroduces a neighborhood fabric lost to mega-block development during the 1950s and 1960s,” Schreiber said. “We are adding streets back to the city where people can live, walk, shop and dine.”

The goal of the effort is to integrate cultural assets throughout the arts center’s campus, according to a news release. To that end, NJPAC will also break ground in 2022 on its new Cooperman Family Arts Education and Community Center on Center and Mulberry streets, bringing arts education to the arts center’s front yard.

The mix of low- and high-rise multifamily buildings will include roughly 350 rental units, 20 percent of which will be reserved for lower-income renters. Other plans for the district include 15 for-sale townhomes and condos.

“The project will create new roads connecting 50 Rector Park with One Theater Square and the river with Military Park,” said Tim Lizura, the arts center’s senior vice president of real estate and capital projects. “The buildings on Mulberry Street are limited to six stories to achieve a more human scale.”

Gov. Phil Murphy was among several public officials and stakeholders who lauded NJPAC’s continued role in the state’s largest city.

“NJPAC has been a leader in the revitalization and redevelopment of downtown Newark,” Murphy said. “I am thrilled to see this next phase of development around one of New Jersey’s cultural linchpins, which will continue the tremendous progress being made in Newark while embracing its storied past.”

Below is a sampling of other statements of support for the project.

“The redevelopment of NJPAC’s campus will be a game-changing step forward for the evolution of Newark’s downtown, creating an ideal live-work-play environment in the city’s heart — and making more affordable housing available for families of all kinds.”

Steven M. Goldman, co-chair of NJPAC’s board of directors:

“Newark’s development over the past several years has been a remarkable success story, and this project will amplify that success. The addition of new homes, new businesses and new places for visitors and residents to explore will bring even greater excitement to Newark’s streets. This is the kind of impact that (Gov. Thomas H. Kean) envisioned when he first proposed NJPAC decades ago. It’s inspiring to see that vision brought to life so fully.”

“This exciting venture will help further transform downtown Newark into a livable, walkable community where people can work, live and play. It leverages the neighborhood’s prime location, center for arts, culture and education, and access to mass transit. The new shops, restaurants, mixed housing, including about 70 affordable units, all anchored by a grand market, will make the area an attractive destination for residents and visitors alike.”

“With projects like Walker House and the Hahne & Co. building, we’ve seen what a difference the influx of new residents and new businesses can make for Newark’s neighborhoods. This expansion of the arts center’s campus will contribute to the reactivation of the city’s streets, and offer Newarkers an affordable and welcoming new place to call home.”