Tower Investments has broken ground on a 103,000-square-foot indoor waterpark at its Showboat hotel property in Atlantic City, as depicted in this rendering. — Courtesy: Tower Investments

A sprawling year-round waterpark with a retractable glass-pane roof is coming to Atlantic City as part of a project that’s now underway at the resort town’s Showboat hotel.

Bart Blatstein, the Philadelphia developer who owns the property, joined local officials this week to break ground on the 103,000-square-foot venue, which will occupy the New Jersey Avenue beach block lot next to Showboat. Plans call for water slides, pools and a lazy river, along with food and beverage and retail outlets, lounge areas and party rooms, as stakeholders seek to diversify the city’s economy beyond its casinos.

“We are incredibly excited to begin this next phase in our development,” said Blatstein, the owner of Tower Investments. “Atlantic City has a long and rich history as a premier tourist destination. Showboat is committed to bringing nongaming, family-friendly entertainment back to Atlantic City, and the waterpark is one more piece to that puzzle.” 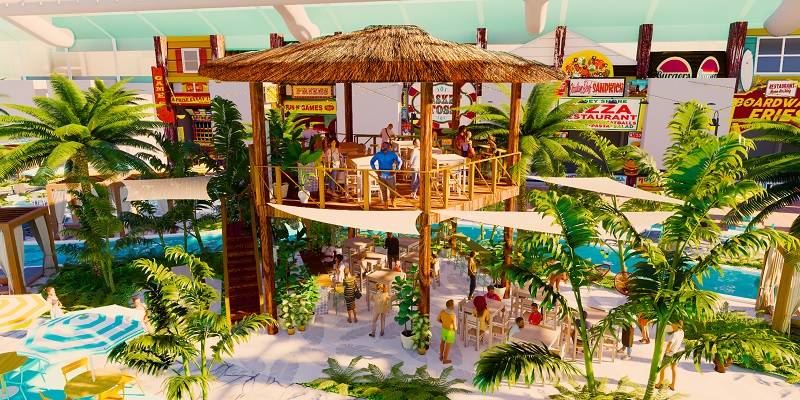 The new ISLAND Waterpark would join Showboat’s 100,000-square-foot Lucky Snake arcade and sports bar, which opened last spring as part of Blatstein’s ongoing bid to expand the former casino property. His firm purchased the hotel in 2015 after it became one of several failed, shuttered gaming halls in Atlantic City, paving the way for Tower Investments to repurpose to distinctive boardwalk property.

Showboat, located at 801 Boardwalk, is the state’s largest non-casino hospitality venue. According to Tower Investments, ISLAND will be the largest beachfront indoor waterpark in the world, while its retractable roof will make it a true year-round destination.

“This is a great day for Atlantic City,” Small said. “Investing in our community through growth will bring jobs and economic recovery to our area. We have lacked family entertainment and this waterpark is the catalyst to draw more families to our great city and give families who live here something great and fun to do!”