The Rockefeller Group has unveiled a new design for a proposed office complex in Florham Park, touting a cutting-edge, vibrant concept that can appeal to tenants seeking a space that doesn’t currently exist in suburban New Jersey.

The firm has tapped Gensler to develop the new concept for the project known as 110 Park Avenue, which is part of the developer’s master-planned, 268-acre campus known as The Green at Florham Park. The project is approved for up to 300,000 square feet of office space, but the new design depicts two connected buildings with distinctive identities and a central plaza, which the firm says is a reflection of its ability to be flexible with the plan.

“We set about recognizing a few months ago that we wanted to try to evoke some new interest in a new concept for the next building at The Green,” said Clark Machemer, senior vice president and regional development officer for Rockefeller Group’s New Jersey/Pennsylvania office. “So we brought Gensler on board and charged them with that, and what we really have now are some concepts that we think the market would receive well.”

Machemer said the original design aimed to create a sister building to the 325,000-square-foot headquarters for BASF of North America, which opened in 2012 as one of the first pieces of Rockefeller’s adaptive reuse of the former ExxonMobil research campus. But the market has evolved, he said, leading the firm “to see if we can stretch the imagination here” and spark the interest of prospective tenants.

With the new design, Gensler took the opportunity to develop a concept that could be distinctive yet flexible enough to create something that’s not currently in the marketplace. For instance, the design calls for a vibrant mix of industrial and contemporary aesthetics at the same time, with one building showing elements of timber and the other with cast-in-place concrete. 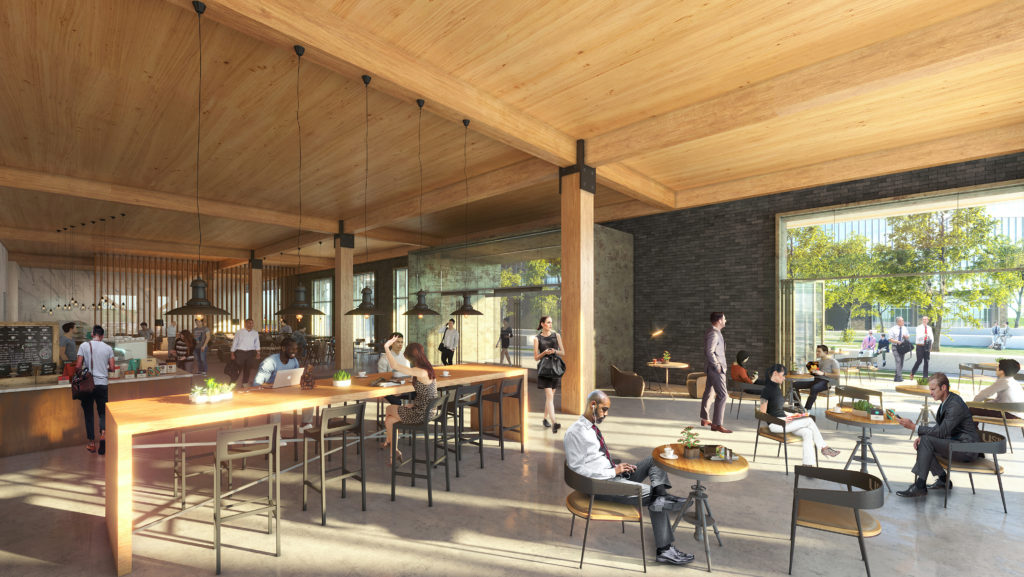 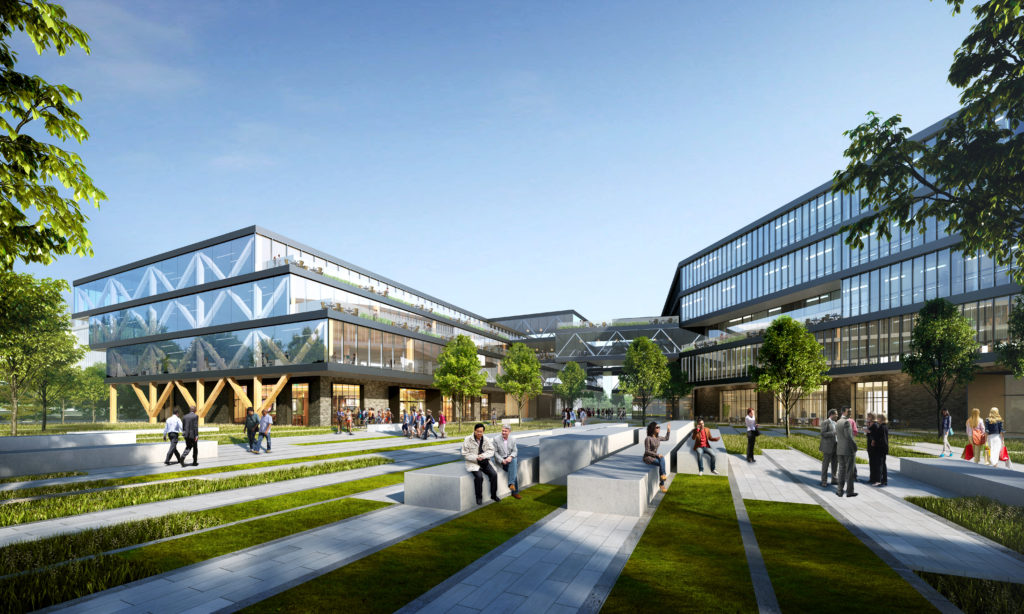 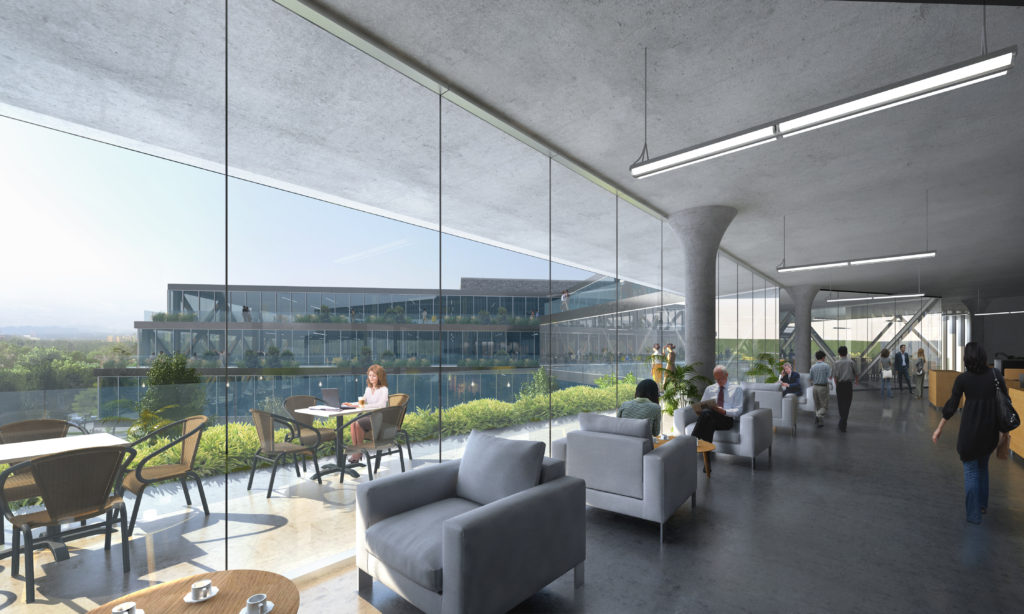 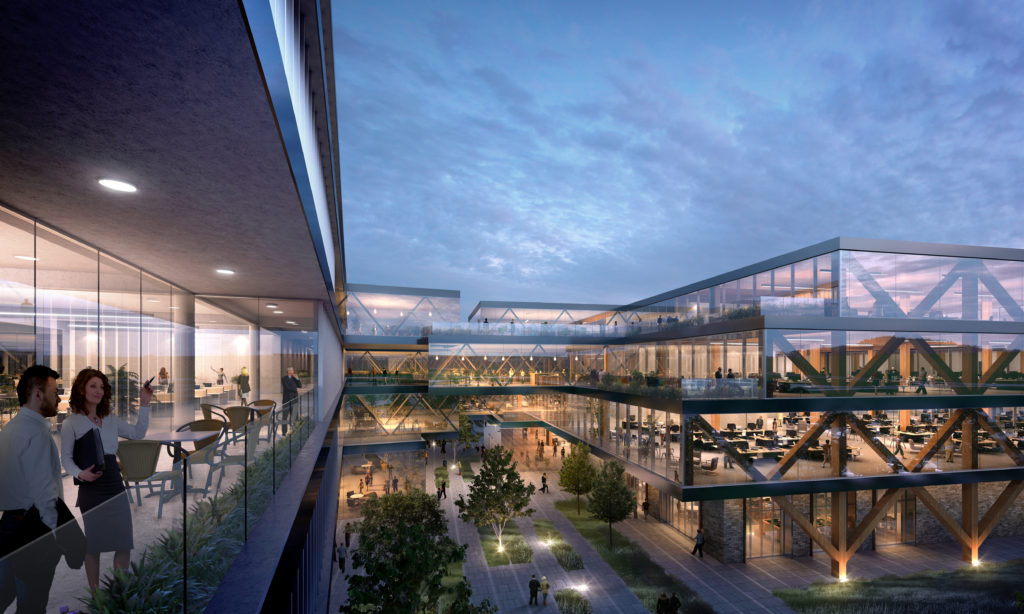 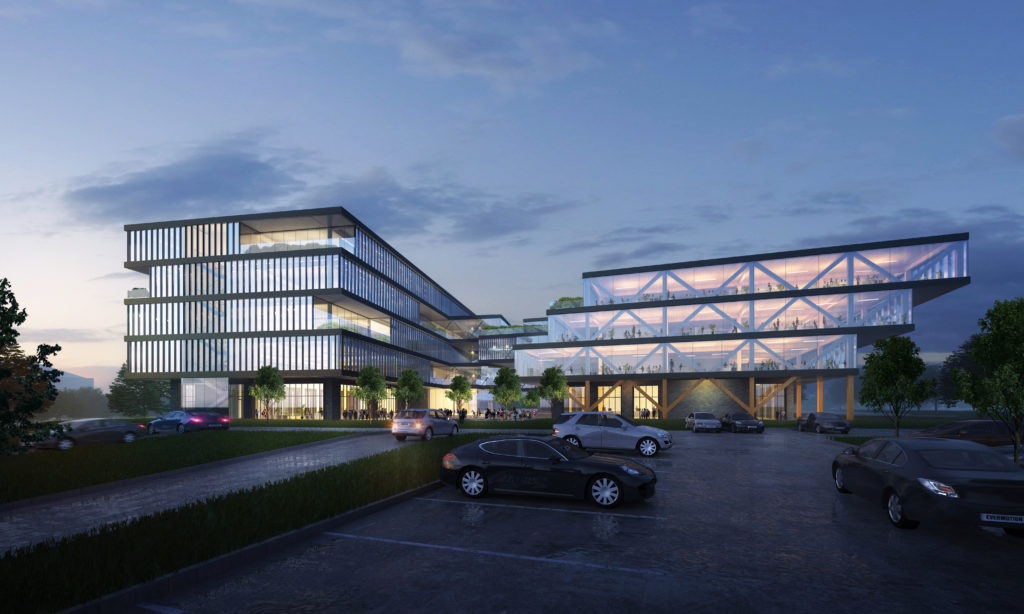 Reid Brockmeier, co-managing director of Gensler’s Morristown office, also pointed to an outdoor plaza that was incorporated into the concept in order to create an urban environment. The plaza allows the buildings to relate to one another, while also creating space between them.

“We wanted it to be something special, but also wanted it to be something that created community, connectivity and a variety of choice in setting up these two buildings that are different,” Brockmeier said. “Yet they relate to each other to appeal to those types of tenants … who want their own identity, so that we could strive to do that, while at the same time creating community and having kind of an urban feel within a suburban setting.”

He also noted that the design allows for outdoor space on the second and third floors, along with a vast open café that is meant to serve as another gathering point for employees in the complex.

Machemer added that much of the concept could be tailored to a final tenant requirement. That includes the floorplates and other physical elements such as the opposing timber and concrete designs.

“It really comes down to what is of the most interest to the individual tenant and how that’s going to play to their workspace and their work environment,” Machemer said.

He said the design of 100 Park has evolved just as the overall vision for The Green has changed going back more than a decade. What was a sprawling research campus has been cleared and replaced by a training complex for the New York Jets, the BASF building, a Summit Medical Group medical office facility and a modern MD Anderson Cancer Center.

The newest additions to the campus also include a recently opened, 256-unit flexible stay facility under Korman Communities’ AVE brand, along with a soon-to-be-completed ARCHER Hotel.

Rockefeller and its marketing team is touting that mix of uses as it pitches the new office space to prospective tenants. Ray Trevisan of Cushman & Wakefield, whose firm is the leasing agent for the project, said there is a strong pool of large companies with expiring leases about two years from now, noting that “we have our delivery timed to be able to meet that demand.”

“This is something that we think brokers are really going to get excited about because you just don’t see this type of architecture in this part of the country,” said Trevisan, an executive managing director with C&W. “We think that there’s going to be a lot of excitement and we think that this design is really going to set us apart from the competition. … And this is part of a vibrant community.”

What is an emerging design or engineering trend that developers should consider in 2018?